Did you know that the average cost of a UK wedding currently stands at a whopping £30,355! It’s great if you can afford to spend, but if you don’t you can still have the day you want on a smaller budget…

For those of you that don’t know, Shane and I are getting married in October this year and we have decided to do our big day on a budget of five thousand pounds. That’s partly because we had a mega expensive 2018 as we bought our first house but also because we don’t want to plough all of our money into one day. We are paying for our wedding ourselves so we want to make sure our money is well spent. 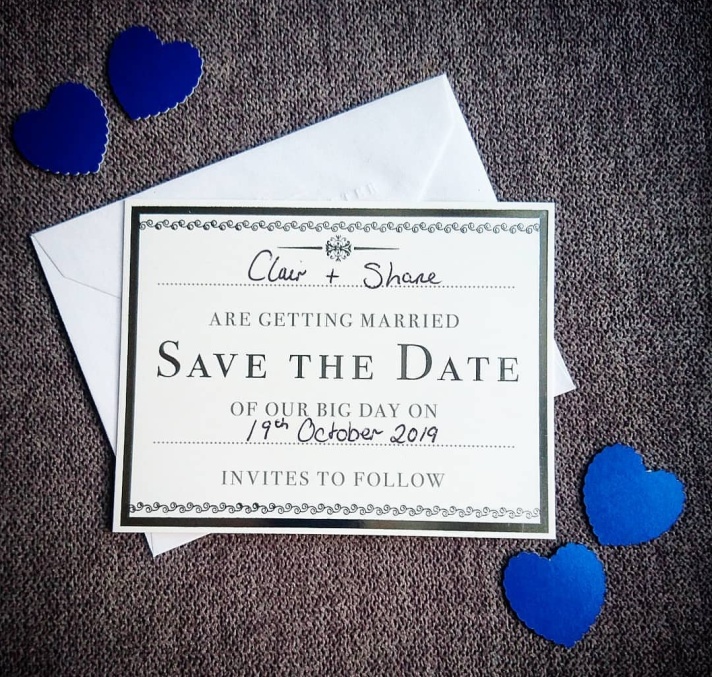 We decided our top priority is to have good food and drink so that is where the bulk of our budget is going. We are however still having a lot of other traditional elements but I’m being creative with the spending, so here are a few of the key elements that I’ve bought on a budget…

Clothing for the Bride and Groom:

If you read my post Say Yes to The Dress for Less, then you’ll know I’ve bagged a brand new dress for £190, I had budgeted for it but my mum surprised me by paying which was lovely! I’ve got my shoes from Quiz for £9.99, they’re navy blue with lots of tiny diamantes, they’re going to be my ‘Something Blue’. They were on offer for £19.99 and I used a £10 giftcard towards them. I also recently purchased a belt from Roco Clothing – it’s a childs belt but is the perfect style and size for me and it cost just £9.99! My veil isn’t costing a thing as one of my bridesmaids is lending me her one as my ‘Something Borrowed’. My total so far is £209.98 (or just £19.98 of my own money spent). 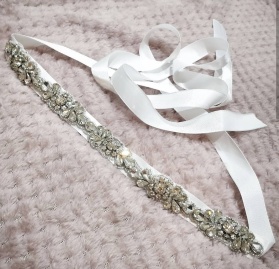 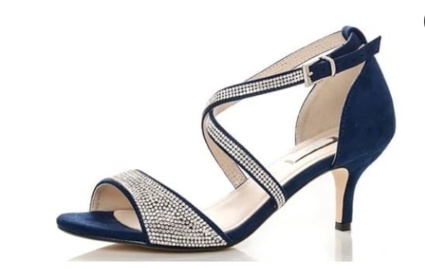 Shane’s suit has come in slightly more expensive at £250.25, he has got a two piece suit from Moss Bros and a waistcoat from Matalan. His suit should have been £279 but Moss Bros had a discount code for £50 off and his waist coat was on a bargain deal that you can read about below. He still needs a tie and pocket square but we haven’t found the right one yet. His suit and my dress will also need a few alterations so that’s another expense that will be added on to these items in the coming months.

Clothing for the Wedding Party:

We have five groomsmen and we have bought them a three-piece suit each from Matalan, they were an absolute bargain and work out at £63.75 a suit. This was thanks to an offer that got a £54 jacket and £25 pair of trousers for just £50 when purchased together. Me being me, I found a discount code that took £15 off when spending £100, I split my order into four £100 transactions and saved a further £60. 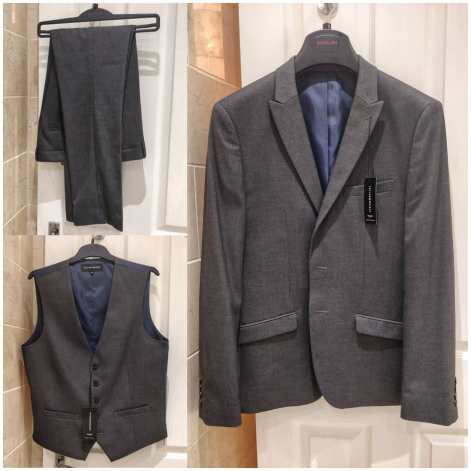 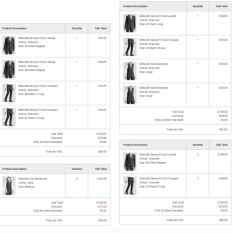 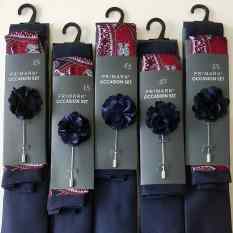 Shane has the same waistcoat as the groomsmen so his suit coordinates with theirs. We also bought each of them a tie, lapel pin and pocket square set for £5 from Primark, we used some money we had been given from my nan for Christmas so they didn’t cost us a thing. We are asking them to just wear their own white shirts seeing as most people have one and for them to wear tan shoes so the total for the groomsmen is £343.75.

I also have four adult bridesmaids, one teenager and two children. The five older ones have gorgeous chiffon and lace dresses from BooHoo.com that cost £18.75 each. The dresses were £25 each but I had a 25% off discount code. I ordered a variety of sizes for the girls to try on and then returned the ones that didn’t fit. Their shoes are from everything5pounds.com and worked out at £5 a pair. The girls have all tried them on and they look amazing despite the low-cost of the outfits. 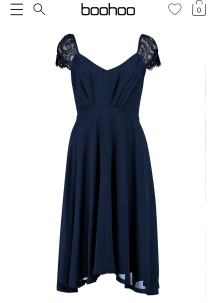 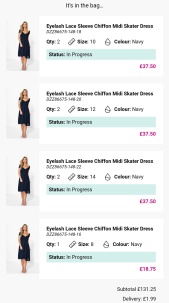 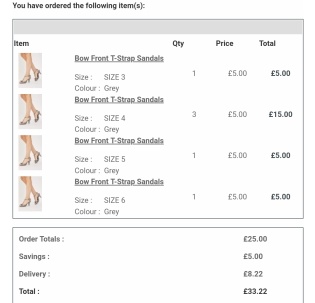 The two children have got dresses from TkMaxx and in total cost £38.97, they need shoes and cardigans but those will be purchased nearer the wedding along with a few accessories for the other bridesmaids. So far the outfits for seven bridesmaids is £162.40. 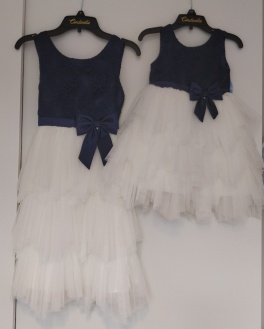 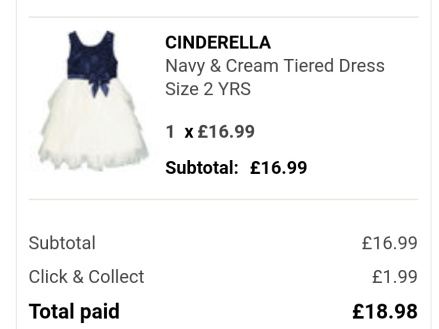 We really weren’t too fussed about the wedding stationery, as long as it looked nice we were happy to get whatever fit our budget. I spotted some packs in B&M that were reduced from £2.99 to £1.49, they included 10 Save the dates, 10 invitations, 10 RSVP cards and all the envelopes. They’re white with silver details and the envelopes are embossed with Happily Ever After. I picked up 6 packs for the grand total of £9. I also bought some blue heart stickers from eBay for £5 to use as envelope seals, so all our stationery has cost £14. 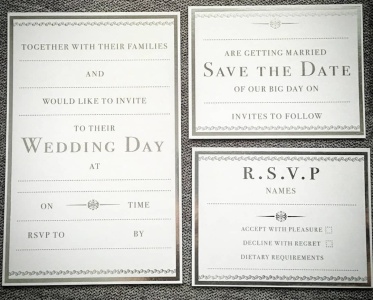 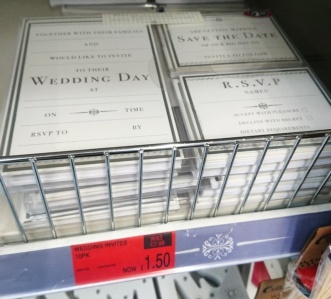 Shane and I aren’t big on photographs and knew we don’t want to end up on a 90 minute photo shoot on our wedding day. We want to be enjoying ourselves and want a photographer to capture this in a series of candid pictures rather than have us popping our heads out from behind a tree or doing some weird poses. That’s fine for those who like that style, but it’s just not for us.

I had this very discussion with a few work colleagues and one of them told me about her photographer, he was just starting out and had charged her just £100 for her wedding pictures! I had a look through a few shots and really liked the style of them, she passed on his details and I enquired about a booking. He told us his prices for 2019 were £400 but as we had been recommended by a previous client, he would do it for £350! We paid our deposit that same night.

We are getting married at our local town hall, it’s a lovely building and it costs just £144 for the ceremony, registrar and certificate. Shane and I have each had to pay £35 to give our notice of intent to marry so in total the ceremony is costing £214. This worked out much cheaper than having a registrar come to us and it also meant that we didn’t have to have our wedding at a licensed venue. We have booked our reception venue and I am excited to tell you about it but I’ll do a separate post about that once we have everything finalised.

The grand total spend on the items listed above is: £1542.38, however my mum did pay for my dress even though I had budgeted for it and we used gifted money to pay for the ties so our actual spend is a bit less. I think thats a fantastic amount to say these are quite big and usually expensive items ticked off the list.

There are still lots of other smaller bits and pieces to get like rings, a cake, flowers and so on but I’ll update you on those further down the line. I hope that by sharing some of the bigger – and usually more expensive – items that I’ve got for less, it will inspired you to shop around for cheaper alternatives when planning your big day.

If you’re trying to do you wedding on a small budget like me, top tips are:

I’ve created a sheet to help you prioritise your big day, you can download and print it for free HERE.