I’m often asked how I grew my Instagram account… my answer is always the same: I’ve just been here for a long time and been lucky with my following. I never set out to grow my account this way, it just gained momentum, it still surprises me that it has happened. So now seems a great time to have a look back over the three years of ‘Thrifty Clair’…

I started my Instagram account as a boost to my blog about deals, discounts and money saving tricks. I discovered the debt free community on Instagram and that is what kept me hooked and spurred me on to share my progress and bargains.

I started the account whilst I was paying off my last bit of debt and starting to save for a deposit on a house. Since then, I’ve become debt free, saved for and bought a house, got engaged, got married and now I’m saving for our future. My account has of course changed alongside these lifestyle changes, the one common theme is always the Thrifty aspect.

I think there is a perception that accounts like mine are earning a lot of money. To test out this theory, I asked my followers what they thought I have earned in the three years of having my blog and Instagram. The guesses ranged from £0 to £10,000 with the average guess being £5000. Before I reveal exactly what I have earned, I want to share my three years as Thrifty Clair… 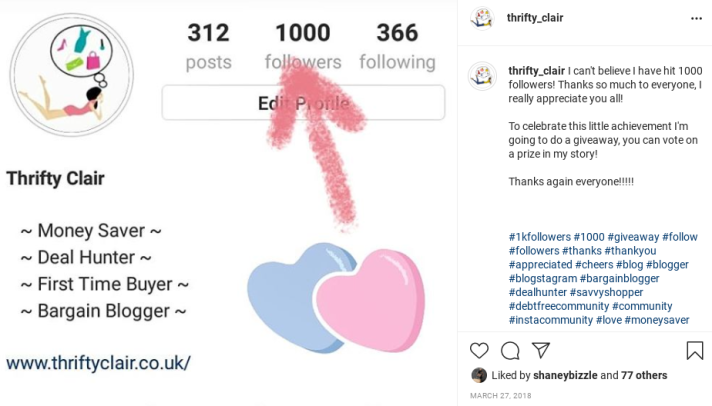 I started out in April 2017 and by March 2018 I reached 1000 followers; that was amazing as I never thought I’d achieve that. Three months later, a journalist contacted me and asked if I wanted to take part in an article about saving money and using coupons. It sounded like it might be a bit fun so I said yes… Little did I know it would go viral!

The article was great, what I didn’t anticipate were the headlines some of the papers used that basically insinuated that I bought my house using coupons! There were also some nasty comments from people on one well known paper’s website! I wasn’t too put off by them though as I knew the article was true despite the ridiculous headlines. These articles boosted my following and by September 2018 I had reached 3000 followers on Instagram.

I was still writing my blog posts but this was the start of my Thrifty Clair Instagram gaining a bit of traction. I was invited to do a story in a woman’s magazine; I agreed but grew to regret this. The journalist spent an hour going over my story with me then weeks later she called back ready to do a read through. The story was completely fictional…

During the read back, I thought she had got mixed up as the story featured nothing that I had told her and sounded like it was about someone else. It had bits about being at the checkout trying to pay for my Christmas food and my card declining and my £10,000 inheritance that I used to buy a house! Neither of which had happened. I questioned this and she told me she had a certain narrative to fit. I refused to continue with the article as it was not even remotely close to the truth.

Since then I have turned down paid articles about my wedding for this same reason. I don’t want someone twisting my words and don’t want nasty comments about my wedding on a newspaper website comments section. I’ve warned others of this too as despite an inspiring story, people want to drag you down and say awful things.

In early 2019 I was invited to go on BBC Radio Manchester to talk about saving money. It was nerve wracking but actually really enjoyable. I went on to do a few more radio appearances and this boosted my confidence. I got a little boost of around 50 new followers on top of the usual Instagram growth.

This brings me to around April 2019, I’d started to talk more on my stories, new followers were joining and my engagement was increasing nicely. I was always amazed at reaching a new milestone, like when I hit 5K whilst I was doing my garden makeover. Then came the email I couldn’t believe… it was from ITV!!

They wanted someone to feature on a program to talk about cashback apps and they had found me through my blog. Doing the TV show was a huge leap for me, it meant the cat was out of the bag at the school where I work. Before any filming was done I checked it was okay with my boss and he was hugely supportive. The TV show aired and the response at work was great.

I didn’t get tonnes of new followers but my website went mad with nearly 10,000 visitors! My Shopmium referral link was used so many times that I had to remove it from my website after just twenty minutes because my phone was constantly pinging with referral notifications, I changed it for Shane’s code, then to my sister’s, then one of my friends so we all got a bit of credit. The Green Jinn website crashed and Shopmium saw a spike in downloads – what I like to think of as my version of breaking the internet!

From there, things have progressed steadily. I’ve gained and lost followers, I have had a few dodgy comments and horrible messages but they have been few and far between. I’ve done the odd collaboration too which has been amazing.

I finally reached 10,000 followers in February this year. I’m not naive, I know that some of those followers won’t be genuine, some will be dormant accounts, some will be bots, others will be people watching because they find me cringey or even tragic whereas others check in to feel inspired and just to see a familiar face (and Poppy of course).

I enjoy sharing things though which is the important thing in all of this. I still enjoy writing my blog posts, it is a fun hobby and a way of me sharing something in more detail rather than a short Instagram post. I don’t always have time for it but I like that I have it there to use to put my ideas and opinions in writing for others to read.

As a break down that is:

The referrals can’t be withdrawn as cash, they are only used for goods on those website. Of course anyone can share these codes, it’s not specific to being a “blogger” or “influencer” with a large following. If I do share a referral, I make sure to be clear that there is an incentive for me sharing it and I disclose it as an Ad.

I only keep a referral up for around 30-40 minutes then share other peoples codes or links. This is because I feel a bit greedy sharing mine and gaining a lot of credit, especially since gaining the swipe up facility. At the same time though, I have a platform that I can use for a few perks so why not?!

This is the first time I have totted everything up and it is surprising to me seeing it like that. Some people assumed I would have earned well over five figures through Thrifty Clair, and maybe I could have if I had more time and energy to dedicate to it. I hope sharing this gives some transparency into the reality of it all.

It is possible to earn more from blogging and from Instagram but as I work full time, it’s more of a hobby for me. I have turned down things like free vape liquid, free perfume or wax melt samples. I’ve been asked to promote credit cards and loans which is crazy given that I promote a debt free lifestyle. I’ve also said no to advertising things like mobile phone or utility providers that I’ve never heard of or used myself. The companies might be great, but I don’t have the time to do the research in to them like others might.

There are some people in the debt free and money saving community that blog as their full time job, as a result, they do more collaborations. Please don’t assume that some people doing more ads or collaborations is a negative or bad thing. We need to get used to seeing people disclosing Ads and Paid Promotions so smaller accounts doing it is such a positive, especially when there are still lots of big accounts – those with tens of thousands of followers who are sharing ads without the correct disclosures. 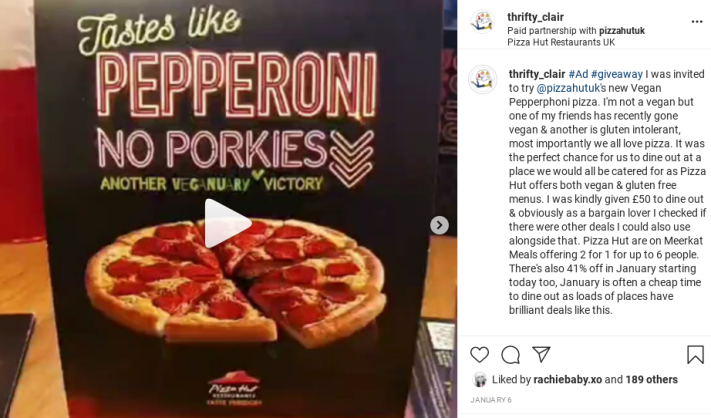 So there we are, three years of Thrifty Clair! It’s been really fun and not at all what I expected when I first started it. I have no idea where it will go but what I love about it all is the people I chat to, the things I learn and the opportunities it gives me.

That isn’t necessarily the paid opportunities but the chances I have had to go to events or help support local charities. It’s the confidence I have gained from pushing myself out of my comform zone to do things like live radio and film for TV shows.

If you’re thinking of starting a blog or an Instagram account, my advice would be to do it… but do it for the right reasons. Don’t do it to quickly grow a page to do collaborations because you think it’s a quick and easy way to earn money.

It’s not as straight forward as sharing a picture and getting paid. There’s a lot more goes in to it all and the main thing – at least in my experience – is enjoying it and having enthusiasm about what you do. 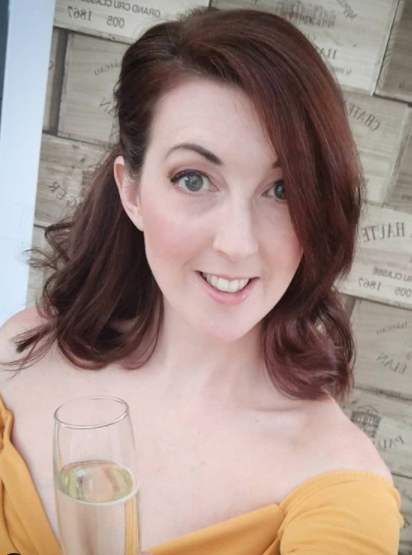 If you’ve got any questions, let me know below and I will do my best to answer them for you.

If you got to this point in the post, thank you so much for reading,