I am often asked for my fakeaway recipes but I have never shared them because I don’t have any. I just use whatever I have in to make small -tapas like – sized dishes to create a buffet style meal. It’s easy to do so here is an insight in to how I get creative in the kitchen…

The majority of the ingredients I use to make a fakeaway are things most people have in their cupboards, fridge or freezer. Though it definitely helps that I have in a collection of herbs and spices; they’re the key to so many cheap and tasty homemade meals.

For last night’s meal, I had a look at what ingredients I had that I could use. There were two mini chicken fillets in a spicy marinade in the freezer, I took those out to defrost, I also had a small amount of onion to use up and around 70ml of white wine that I had left from Friday night.

This is the sort of stuff that some people might see as useless but I see them as handy for using in these sort of meals so I always save them. I had a look at the basics I had: rice, potatoes, cheese, noodles, pasta, beans, sweetcorn, sweet chilli dipping sauce, soy sauce etc. Taking all that in to account I decided on a Chinese style fakeaway of five mini dishes: 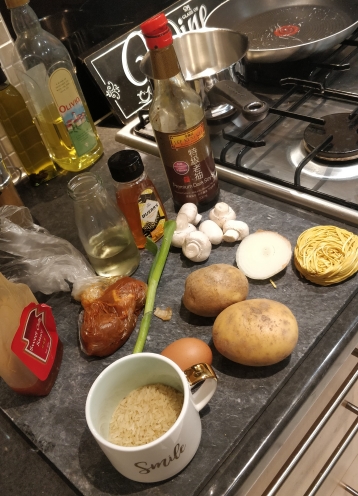 As you can see from the picture, the amount of ingredients I used isn’t huge yet it created a decent sized meal for two. I occasionally get messages from people saying “OMG, that wouldn’t fill me up”, but of course I cook meals that are filling for us. If you’re creative something like this then of course quantities can be adapted to suit your needs.

It’s also worth remembering, I’m not cooking this amount of food because it’s Thrifty or cheap, I cook this amount as it makes a filling meal without over facing ourselves. Both me and Shane could fill our plates with double the amount of food and eat the lot but then feel sick and sluggish. That’s never the case after a home made fakeaway, it’s filling and does the job of a takeaway whilst using up small amounts of ingredients which helps prevent food waste.

My other option for last night’s meal was a Mexican style platter. I would have used a lot of the same ingredients just in different ways, for example: potato wedges or loaded jacket potato skins, spicy sweetcorn rice, shredded chicken with fried onions in taco seasoning, some lasanga sheet nachos and I might have had a go at making breaded mushrooms… Again, using what I have in but tweaked to suit a different style of dish.

I hope this has inspired you to have a go at making your own buffet style fakeaway. If you want to have a go at recreating mine, I’ve listed all the ingredients I used below along with how I cooked each dish. Remember, there’s no set rules for these kinds of meals, just try to think outside of the box with what you have.

Here’s what I used for a Chinese fakeaway for two: 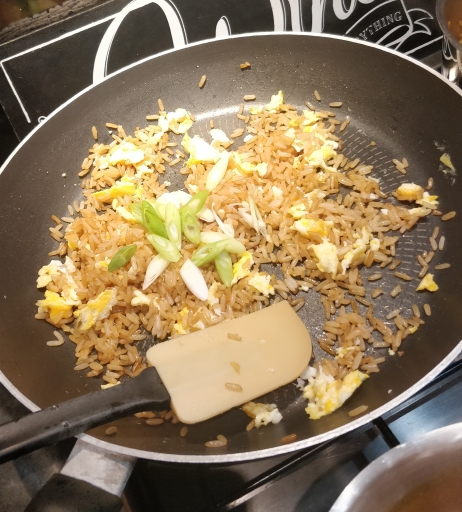 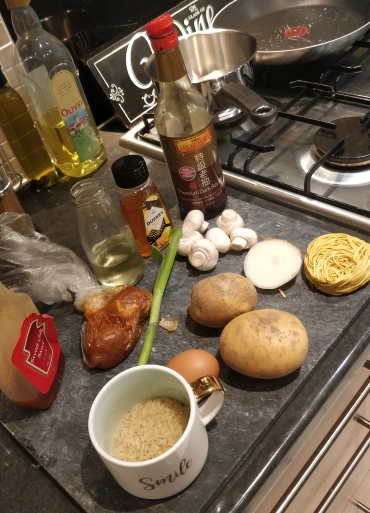 Here’s how I created each dish…

If I’m using oven chips, I cook the chips as normal then add a bit of oil to a frying pan, add the seasoning to the pan followed by the cooked chips, mix around and fry them for a couple of minutes. I sometimes top them with a bit of diced onion and chilli but this isn’t essential.

I sometimes add in a handful of frozen peas or sweetcorn, I pop them to the pan a minute or two before adding the egg. For last night’s nice, I added half of the raw spring onion to the rice for added texture.

The sauce thickened quite quick so I added a bit of water to loosen it up. You could do this with any meat and any dipping sauce, a small pack of stir fry sauce or just a mix of soy sauce and honey. I topped this with half of the sliced spring onion.

I sprinkled on a few sesame seeds and chilli flakes that I had leftover from a meal kit though they weren’t needed, garnishing like this just makes it look a little bit fancier.

I sometimes add in some fried beans sprouts or fried onions to the noodles, but they’re just as nice on their own.

I also created a Chinese style curry sauce to drizzle over the rice. I used a bit of the starchy rice water mixed with some curry powder, a bit of the salt and pepper seasoning and a pinch of sugar. I left it to simmer then before serving I thickened it with a teaspoon of flour mixed with cold water. It isn’t something I’ve made before but it absolutely did the trick, it was a case of tasting it and adding a bit more of whatever it needed. It would be simple to do this with a bit of chicken gravy mix, curry powder, Chinese five spice or chilli flakes.

This is how I create a lot of my meals, so there isn’t a set recipe as such, it’s a case of using what I have available. In the past, I’ve made a similar meal and used some chicken wing off-cuts to make salt and pepper wings, a small 70p piece of steak friend in chilli oil made some tasty chilli beef. There’s so much you can do to be creative. 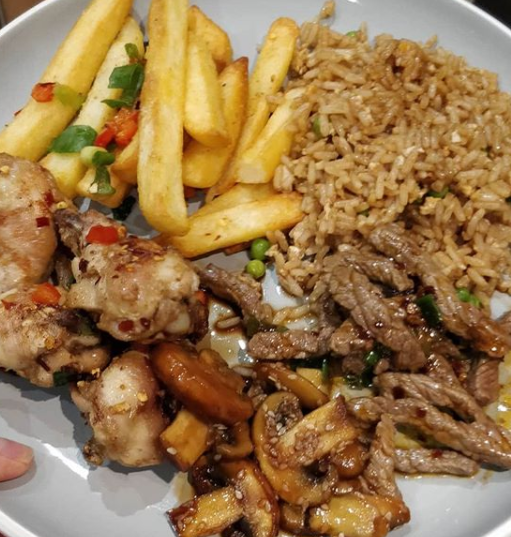